How fast is too fast in leadership? It depends on the speed of the culture you are in! TV Producer, CEO of The Yes Academy explains.

Didi is the CEO of The Yes Academy, a results-driven educational mentorship program for entrepreneurs. She was given the highest level award “Women of the Decade for Entrepreneurship and Venture Capital” from the Women Economic Forum as well as an award of Achievements, Recognition and Excellence by the National Council of Women from the Egyptian Government.

She has also been honored to speak at the Global Entrepreneurship Initiative at the United Nations and she was the resident speaker on the Think and Grow Rich Legacy World Tour 2019.

As a TV Producer, she is the Executive Producer of “In Case you Didn’t Know with Nick Nanton” featuring Robert Kiyosaki of “Rich Dad, Poor Dad” and another TV show “SpeakUP”, both on Amazon Prime Video. She has starred as a guest judge on the #1 Digital business show “Elevator Pitch” as well as a feature documentary on her journey as a speaker called “Impact.”

Didi was given the Certificate of Recognition by Mayor Eric Garcetti of Los Angeles for helping women entrepreneurs succeed. She is featured in the article “Women Who Mean Business” in the current March issue of Oprah Magazine.

In Fall of 2020, she will be knighted as “Lady Didi” where she will join the Royal Order of Constantine the Great and St. Helen of Spain to further the Royal initiatives both domestically and internationally.

Her superpowers lie in managing her four children under the age of nine (including a set of identical twin girls) as well as all her projects and clients — always with a smile on her face. 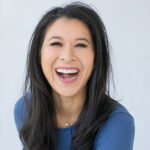