March of Dimes President and CEO Stacey D. Stewart discusses her leadership journey and the keys to success in leading a global organization.

Stacey D. Stewart joined March of Dimes as its fifth President and CEO on January 1, 2017. In this role, Stewart heads the organization leading the fight for the health of all moms and babies. She is responsible for all aspects of the organization’s strategy, vision, and operations.

Stewart came to March of Dimes from United Way Worldwide, where she served as U.S. President, leading national efforts in education, revenue growth, health, and brand recognition. A business veteran with an extensive background in finance, Stewart has also held a number of senior roles at Fannie Mae, Merrill Lynch, and Pryor, McClendon, Counts & Co. Stewart has a master’s of business administration in finance from the University of Michigan and a bachelor of arts in economics from Georgetown University. She also holds honorary degrees from Trinity University, Morgan State University, Texas Southern University, Lincoln University, and Alabama A&M University.

She currently serves on several boards nationally and in the Washington, D.C. metropolitan area. Ms. Stewart and husband Jarvis reside in the DC Metro area with daughters Madeline and Savannah. 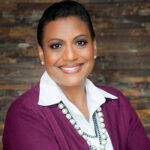